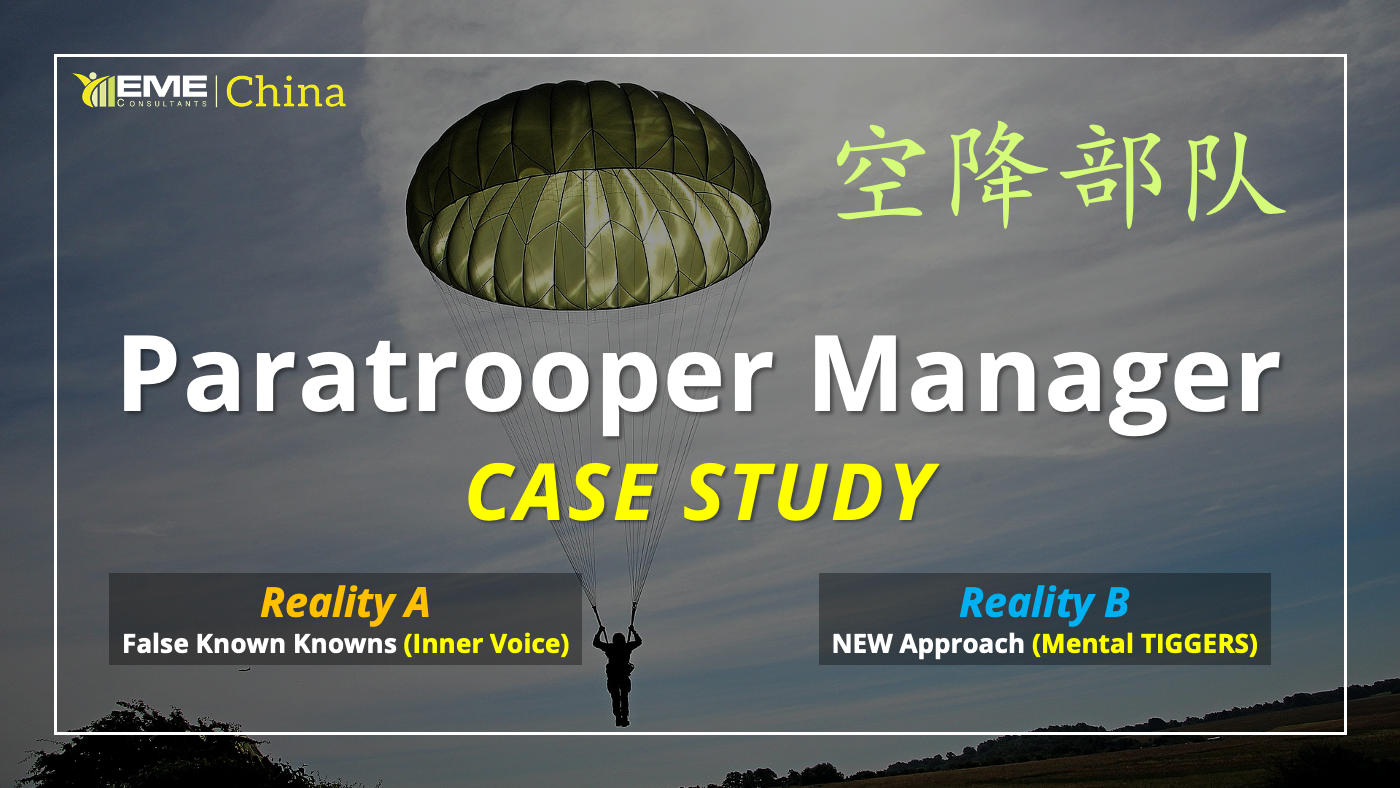 Most Expats are also Paratrooper Managers, which are foreign leaders perceived by the local workforce to add very little value other than being in a position of authority.
China Expats generally face the most daunting path forward due to cultural dichotomies that push the limits of our Western moral values and sensibilities. Couple this with negative geopolitical media coverage on both sides, and you have a recipe for disappointment.

The things we don’t know (KNOWN UNKNOWNS) have the potential to harm or impede our efforts doing business across cultures, so it is sensible to be as prepared as possible before landing in a foreign land and meeting your counterparts for the first time.

But if only it were that easy. The things we don’t know we don’t know (UNKNOWN UNKNOWNS) seem impossible to prepare for, while they often shock us in disturbing ways. HINDSIGHT can teach us lessons, but even armed with new knowledge and experience, history tends to repeat itself.

Chinese generally give foreigners the benefit of the doubt when they violate local customs or cultural norms. They are equally frustrated with the lack of progress, but they sometimes attribute it to ignorance or vanity and choose to “give Face” rather than directly confront the abnormal behavior.

The Expat is oblivious of his faux pas and becomes increasingly irritated by the lack of progress, while unaware of an even more fatalistic mindset guided by the things we think we know that are false (FALSE KNOWN KNOWNS) within the local cultural context.
We can recondition this modus operandi (MO) through the use of Mental TRIGGERS with repetition and practice.

Mental Triggers are the bridge between “knowledge” and a new, winning approach or modus operandi. Our deeply embedded behaviors that lead to our “unexpected disappointments” doing business across cultures can be adjusted or enhanced by practicing and adopting a new way of thinking. 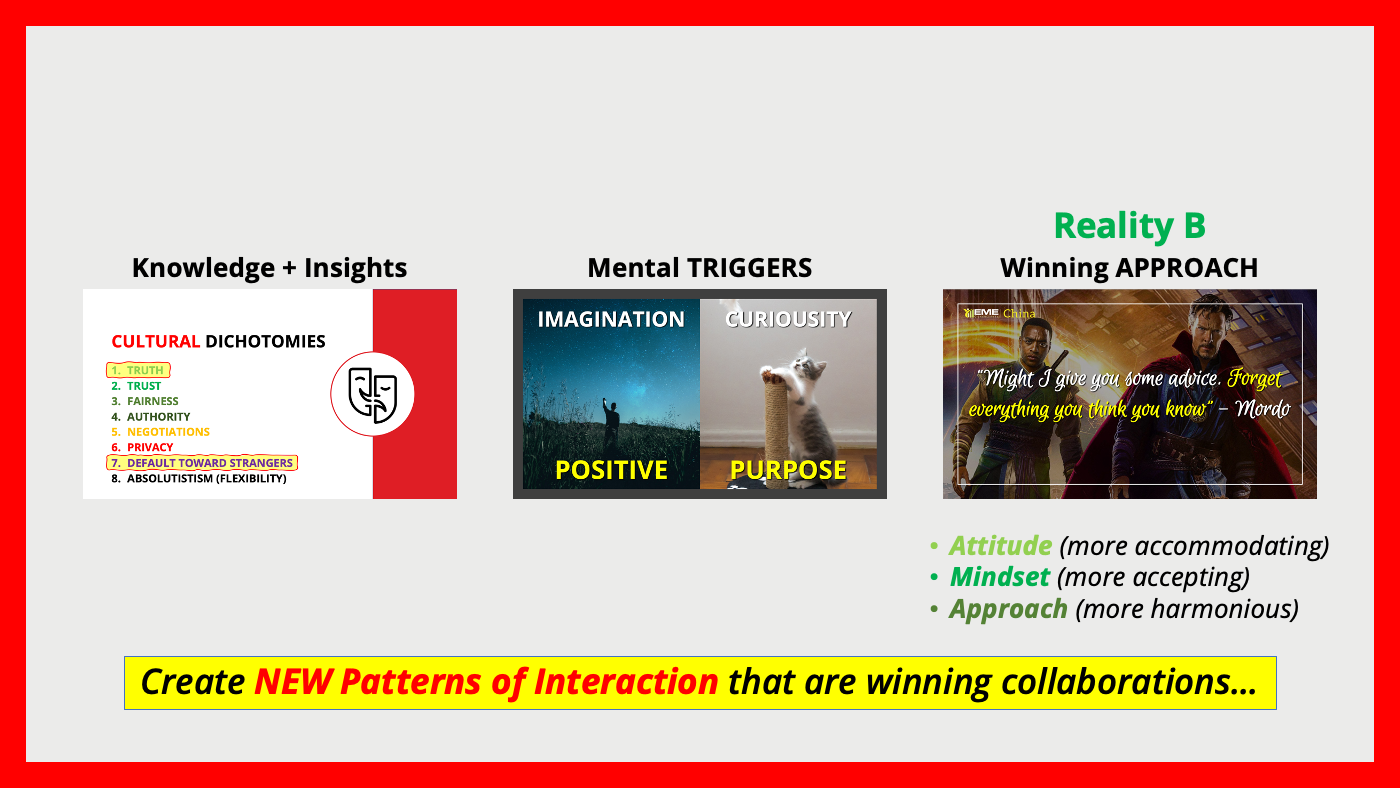 Try to use your imagination as we examine three “key interactions” between me and our China sales manager, who was one of my direct reports.

Reality A, which is what happened, was influenced by the FALSE KNOWN KNOWNS of my Inner Voice. Reality B is a better outcome that could have resulted had I used the Mental Triggers to develop a new approach.

My assignment in China labeled me a classic Paratrooper Manager in every respect.

Therefore, it’s not hard to imagine local Chinese employees questioning what “value” I can bring other than I might have incredible interviewing skills, and now try to imagine the challenges of working against these perceptions.

In this case, the China sales manager opportunistically spread false insinuations in Germany to create a rising tide of doubt regarding my performance. By the time I realize his scheme, it wasn’t worth the battle to reverse the rising tide of misperceptions. 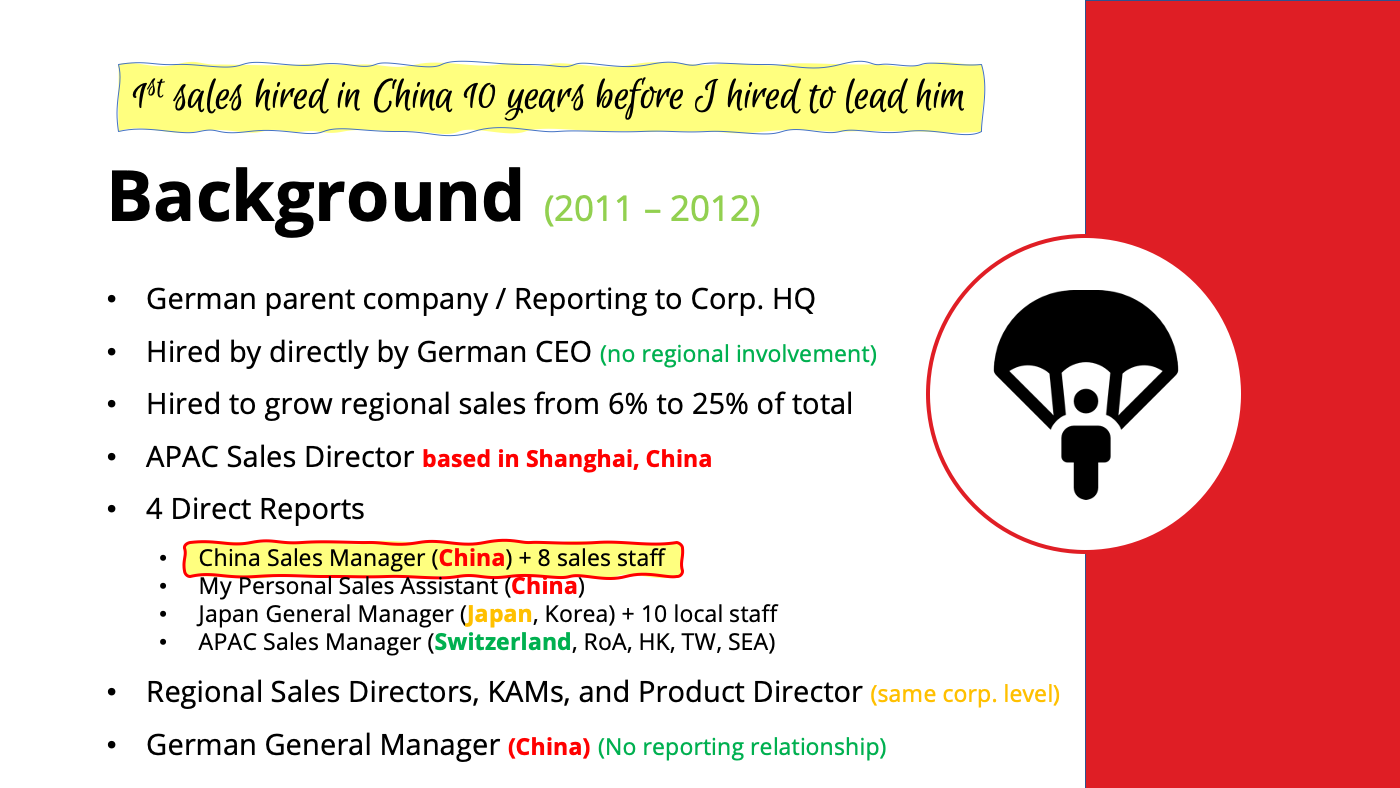 Every relationship is a series of interactions, but it is the KEY INTERACTIONS that either stack negative emotions against you or positive sentiments in your favor. 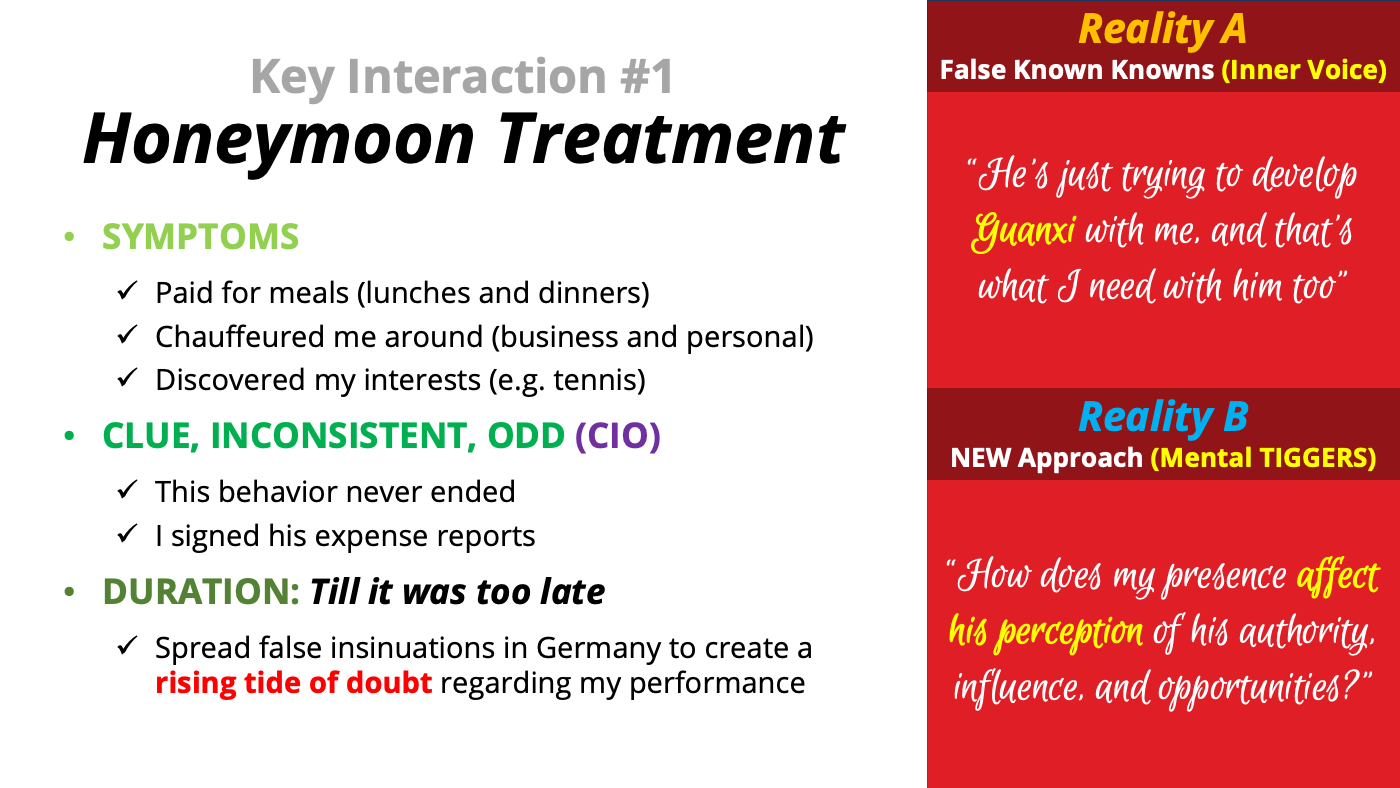 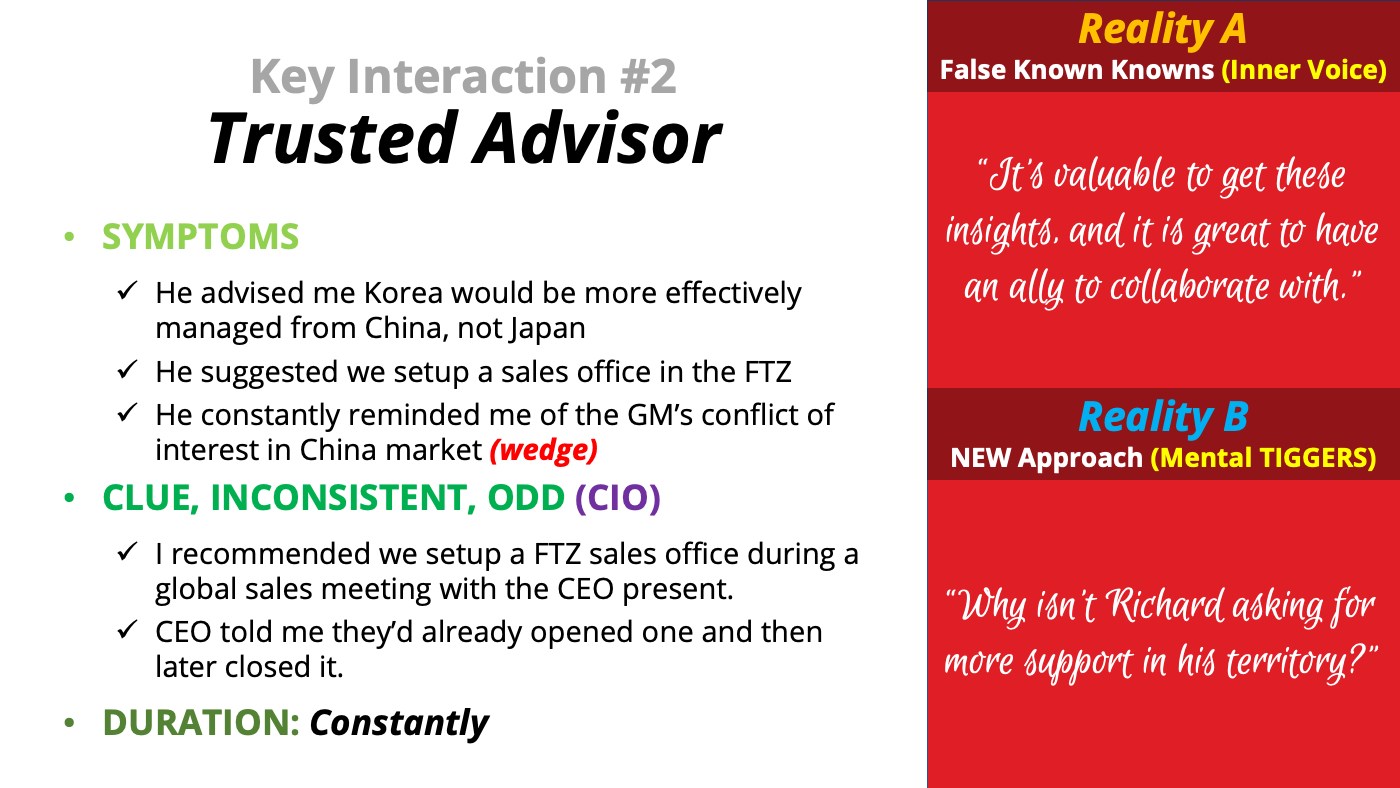 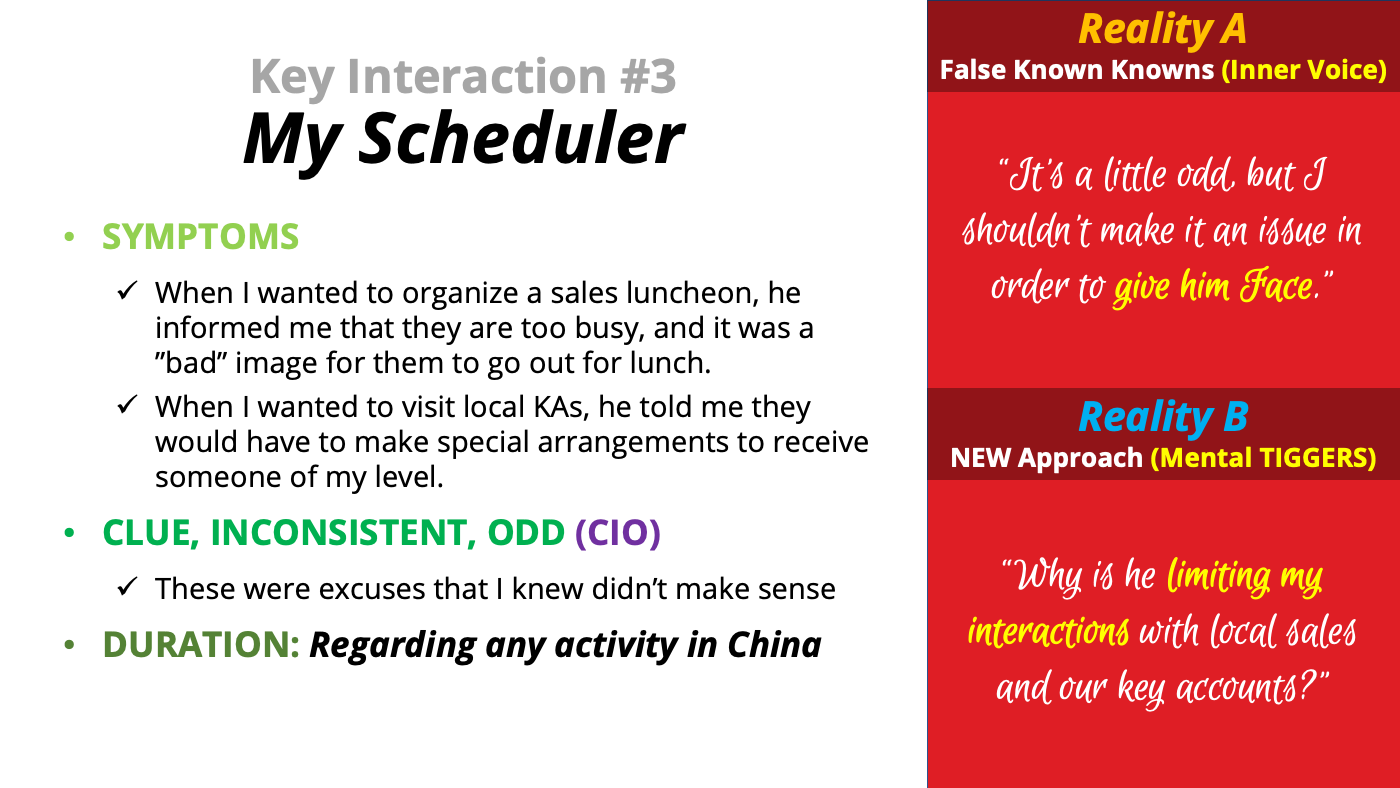 The “unexpected disappointments” that we encounter doing business across cultures as a result of our UNKNOWN UNKNOWNS and FALSE KNOWN KNOWNS are what I call China Leadership Dilemmas or CLDs.

To learn more, subscribe to my podcast or join our monthly online Meetup events to engage with me and other China experts.