How to end Chinese circular conversations in 5 minutes 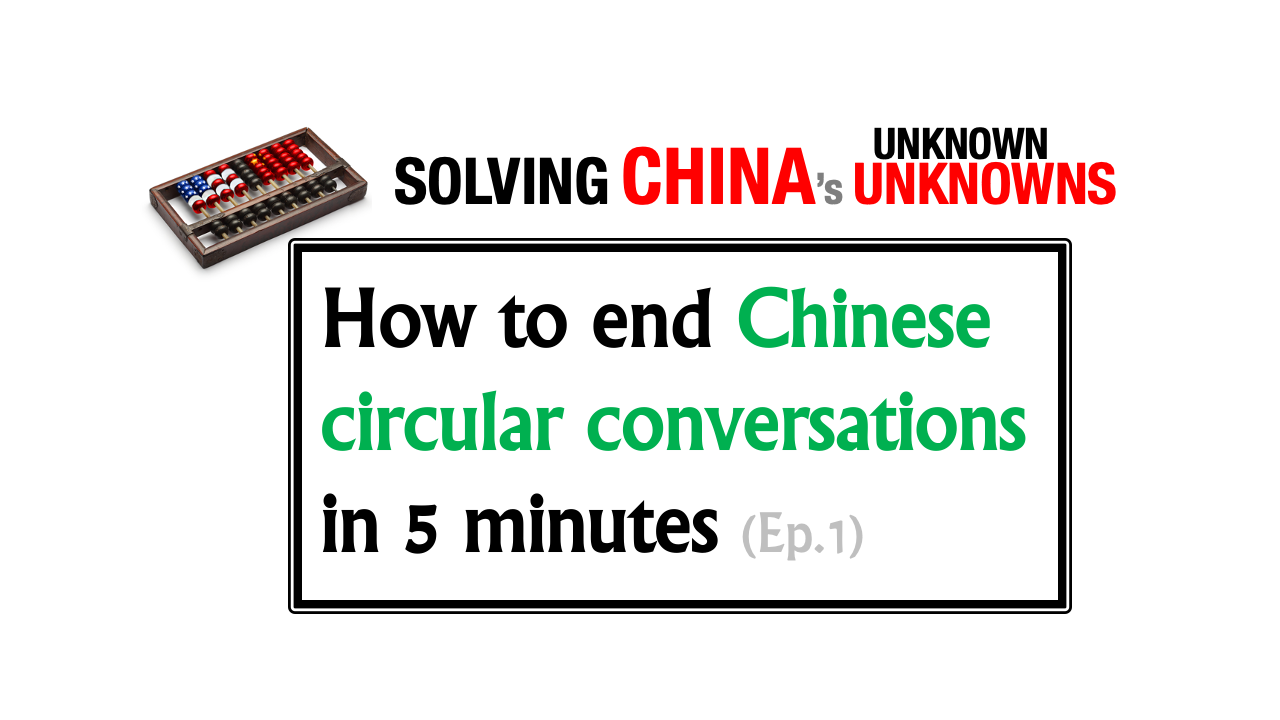 Have you ever been in a circular conversation?

Of course you have. Most arguments with your parents, siblings, or children are circular. If you've ever been married or in a serious relationship, you've no doubt experienced the frustration of saying to the other person…

"you're NOT listening!"
"No, you don't understand!"

…all punctuated with exclamation points.

So, are circular conversations with those we work with in another country any different?

Specifically, I know many of you doing business in China are eternally frustrated with circular conversations with your Chinese partners, employees, and coworkers, and WE CAN ALL AGREE THAT it is counterproductive on one end and outright dysfunctional on the other…

In this episode, I'm going to explain why asking WHY to your counterparts in China often triggers a circular conversation that CAN BE AVOIDED.

First of all, most people don't ask WHY unless something is wrong or something bad has happened. In a collectivist culture such as China's, NO ONE wants to be accused or have to take personal responsibility for something going bad.

So when you ask WHY, it is safe to assume a DEFENSIVE POSTURE is immediately triggered, regardless of how desperately you try to explain that "no one will be blamed" and that "we just want to understand how we can improve or avoid something happening again"

Those other statements simply don't compute, especially if you are in a position of authority. Which is WHY you may get a range of responses that all likely lead to a circular conversation.

#1 - They pause and are silent, usually waiting for you to say more because they are conditioned in a hierarchical system that the person in charge WILL continue to say more.

#2 - Then, WHEN they are eventually forced to explain, they will provide a reason or explanation, which is actuality an excuse and deflection. This again, is customary in Chinese culture. Giving an excuse is also a form of giving FACE, because it suggests that they would NEVER knowingly or intentionally do something wrong. This circular conversation in Chinese culture is like a ritual that repeats over and over again, so Chinese people are accustomed to this type of conversation.

#3 - And finally, Chinese people can almost NEVER speak in facts and literal truths because their perspective and worldview is always RELATIVE. It's relative to other people, organizations, or countries in the larger context, but it is also relative to their emotions and personal ambitions.

Yes, ALL OF THIS can be triggered by simply asking WHY, so my suggestion is, if you want to minimize circular conversations in China, then you should always seek an INDIRECT path to getting the answers to want, and additionally you should try NOT to care about questions with which the answer wouldn't change anything.

And especially, NEVER ask a question where you already know the answer, but you just want them to acknowledge what you already know. This would be COUNTERPRODUCTIVE to all of your long-term goals in China.

THANK YOU FOR LISTENING. I know this tiny bit of insight probably won't solve any problems for you, but I hope it has given you some ideas that may help you improve your communication with Chinese people.

And if you are interested in learning more about this topic, you can follow me on LinkedIn and read my blogs, join my workshops and MEETUP events, OR even sign-up for my online courses and training programs…

All under the title of SOLVING CHINA'S UNKNOWN UNKNOWNS.