The EME story began in 2015 in Shanghai, China with the idea that culture matters!

EME is an acronym. This first ‘E’ means to Empower, and the following ‘ME’ has two meanings.

Our mission is to empower individuals (you) towards greater success in multicultural environments. 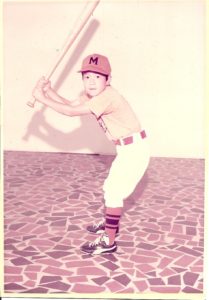 I was born and raised in Atlanta, Georgia and grew up as a typical All-American kid, playing little league baseball, church basketball, soccer, and football.

I grew up in suburbia, attended an all-white elementary school, a mixed-race high school with black and white kids, and only interacted with Chinese students for the first time as an engineering undergrad and Georgia Tech. 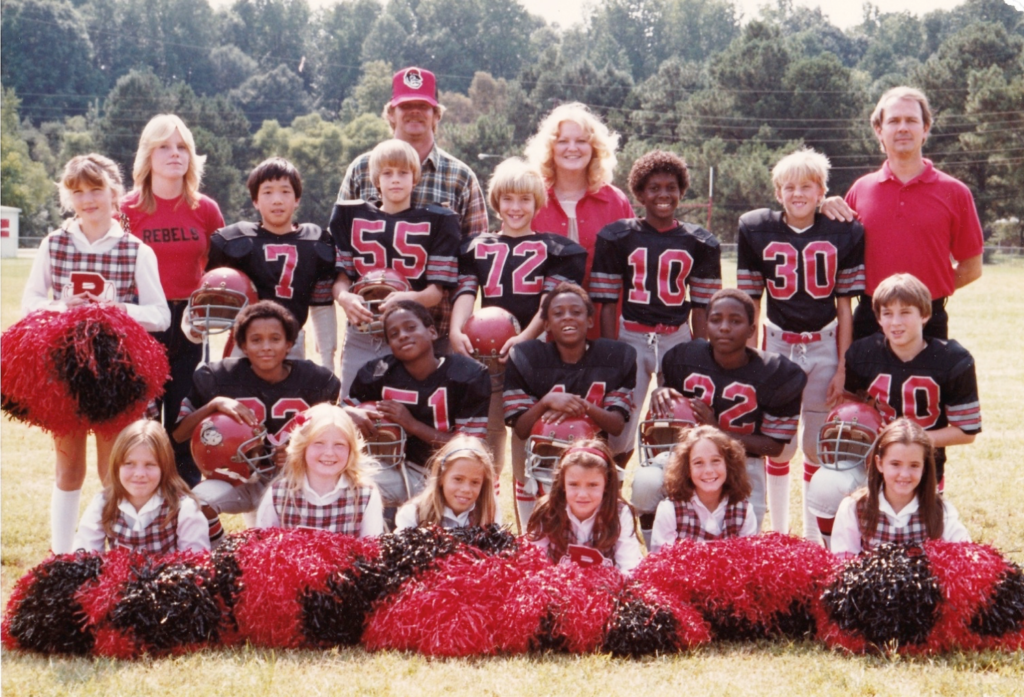 My father is a retired professor of Physics from Georgia State University, and my mother is an artist, writer, and former middle school teacher. Despite this common Overseas Chinese family background, I partied along the Florida coast every spring break since turning 16, learned to play electric guitar and formed a heavy metal rock band in college, and I never really wanted to become an engineer although I graduated with a mechanical engineering degree.

After graduating from Georgia Tech, I began my career as an applications engineer for a Japanese company, and I received my first foreign assignment in Toronto, Canada in 1994. My first role in Asia was in 1996 when I was Country Manager, Taiwan for Thomson Industries. Thomson was a traditional American manufacturing company based in Port Washington, NY that has since fallen by the waste side due to low-cost Asian manufacturers.

After finishing the second grade, my father took a one-year sabbatical to teach Physics at National Taiwan University. Since I did not have a Chinese third-graders’ language skill, I was placed in first grade in the mornings to learn Chinese Pinyin, ate lunch with the teachers, and then joined the 2nd grade class in the afternoon.

I developed my foundation for speaking Mandarin Chinese in Taiwan, so by the time I returned in 1996 as country manager, it was a relatively fast learning curve to communicate in Chinese with distributors and key accounts. And henceforth my professional journey into China begins…

I met my wife in Atlanta in 2011 where she was a postdoc fellow of medicine at Emory University. We went to Las Vegas on our first date and decided after less than a year to get married before I was shipped off to Asia for another overseas assignment.

While we met in the United States, my wife comes from a very traditional Chinese upbringing from a fourth-tier city in Hunan Province. She didn’t visit the US until after receiving her Ph.D. in Beijing, so her cultural values and mindset to this day are still very Chinese in the most traditional sense.

The dynamic of this intercultural marriage has given me a 24/7/365 all-access pass to continuously deepen my understanding of opposing cultural differences through the most intimate of personal relationships, and this is where I derive much of my imagination and purpose-driven curiosity to continuous enhance self-awareness and empathy. I thank my wife daily for being an inspiration and helping me to discover the power of adjusting myself in creative ways to improve perceptions and build more enduring relationships.

Looking for a springboard away from traditional manufacturing industries, I began pursuing an MBA degree in 1999 and quickly landed a marketing internship at Motorola during the first semester.

This internship quickly evolved into working full-time as a marketing project manager. Though I was still taking full-time MBA classes, my focus was now on the opportunity at Motorola. In 1999, Motorola was the king of mobile devices, and the Star Trek inspired Motorola StarTAC flip phone was the most popular and revolutionary mobile phone in the world.

I reported directly to the VP of Marketing and had no reason to doubt I wouldn’t be working at Motorola after graduation. I even turned down a job offer from Intel after they refused to budge from their initial offer with stock options for recent MBA grads. Yes, hindsight is always 20-20!

In March 2000, the dot.com crash sent all high-tech companies reeling, and Motorola laid off 33,000 employees and initiated a worldwide hiring freeze. There was no full-time offer coming from Motorola, and I graduated on 2001, like so many of his classmates, without a job. The events of 9/11 later that year also didn’t help the job prospects of those who graduated in 2001.

I rebounded rather quickly and was hired for an 18-month Management Develop Program at Philips Broadband Networks later that year. Yes, this is the same Philips that produces all sorts of personal electronics, appliances, and healthcare products. This was another dream opportunity, and I quickly went from a marketing analyst to APAC Product Manager. I developed a go-to-market strategy for FTTx products that was approved by the investment steering committee, so off to Korea I went to attend the Intelligent Building Systems Expo in 2002.

My return flight from Korea landed early Saturday morning, and I was eager to present my trip report detailing all the opportunities I had discovered in Korea. I completed my trip report with PPTs during the return flight, and I walked into Philips on Monday morning full of excitement and anticipation regarding how I would soon be leading the promotion of Philips FTTx products in Asia. 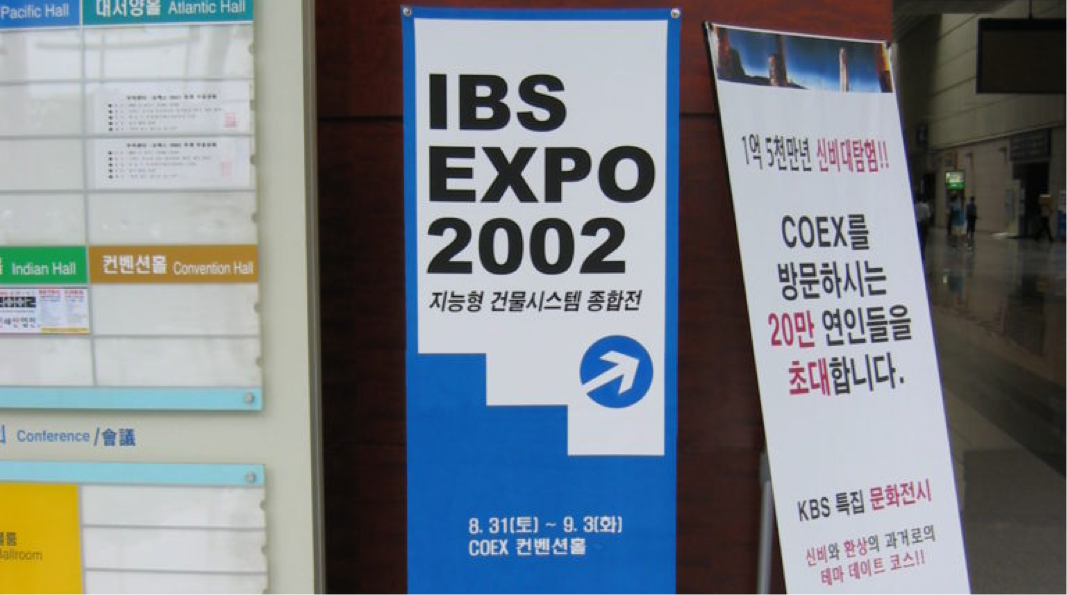 I walked into the office Monday morning and was directed to a room on the second floor where I was greeted by the human resource director and handed a small envelope. The envelope contained a termination of employment notification with a small severance package. The Broadband Networks division of Philips had been acquired by another company, and all Management Development Programs were canceled. As promising as my new career at Philips began, it was over after less than a year.

For the next eight years, I bounced between employment that was uninspiring to entrepreneurship that was unfulfilling. During this period, I held several more positions with responsibilities in Greater China and Asia Pacific including global account manager, channel manager, and Asian engineering and business development manager. For my career, this was a lost decade trying to find the right opportunity with the right organization that never materialized, but for my professional development, it resulted in the accumulation of transferable skills that continues unabated in the realm of doing business in China.

I began an expat assignment in Shanghai as Asia Pacific Sales Director for a German company in 2012. China was the most significant market in Asia Pacific, and my direct reports included Chinese, Japanese, and German regional managers.

This assignment was another DREAM OPPORTUNITY since realizing the ability to speak fluent Chinese was a tremendous career asset. I had landed a leadership role in Asia with company-paid perks and incentives, and my success would leverage all of my international experiences and language skills to their fullest. 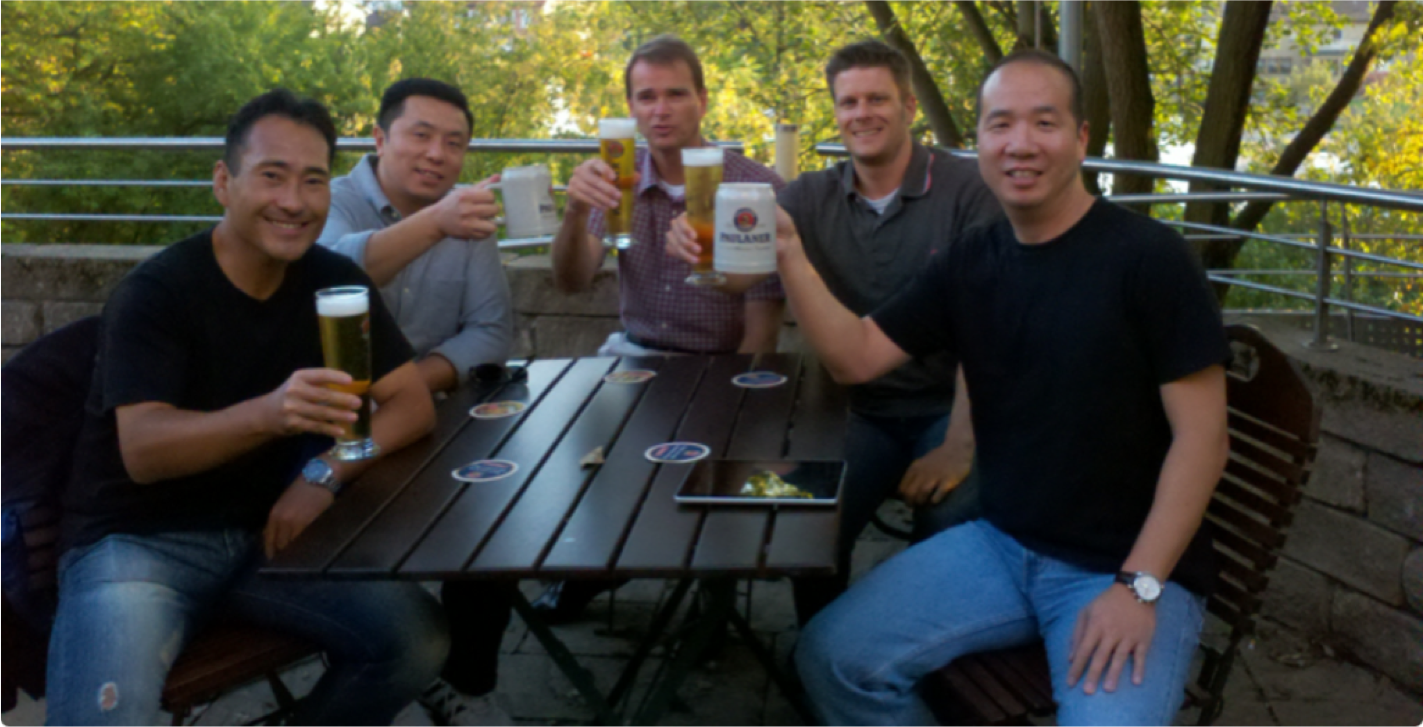 But the honeymoon was short-lived. I quickly discovered several internal conflicts of interest that this family-owned German company continued to maintain as the worse kept secrets in global business affairs. Recognizing it would become a lose-lose proposition to fight these perpetrators who all had over 10+ years of company experience and allies throughout the organization, I quietly negotiated an amicable separation and left with an excellent severance package that included Allianz Worldwide Healthcare coverage to stay in China.

My wife was happily employed at a multinational pharmaceutical company in Shanghai, and it would have been unfair to ask her to quit her career and relocate again to another country.

The accelerating trend in China is fewer Expats and more local leaders. Companies need leaders who can get things done in China more than they need those with corporate connections, product knowledge, and the ability to speak perfect colloquial English. So with a toolbox full of transferable skills and no particular industry expertise, I was fully aware of the difficulty to find another expat assignment with similar responsibilities. And so begins my venture into the world of consulting…

Enter Hitachi-Celerant Consulting. I completed a 40-week performance management systems (PMS) commercial excellence project implementation at a Dutch fortune 100 company’s joint venture in Nanjing, China with a Chinese state-owned enterprise (SOE). All of the soft skills I had developed were on full display to complete all of the project milestones and deliverables. Project success included financial KPIs as well as realizing behavioral changes with the local Chinese sales team. You can read the case study on LinkedIn.

I love to help others solve their business challenges and personal dilemmas, and I am also passionate about continuously adjusting my attitude, mindset, and approach (AMA Values) to achieve better outcomes. Around the time the project in Nanjing was coming to an end, I was already considering life after consulting.

For thirty-seven consecutive weeks, I was on the 6:30 am Monday morning train from Shanghai to Nanjing and then the Friday 6:30 pm train back to Shanghai. Consulting doesn’t leave much room for a family life, so I was intrigued when a local Chinese friend proposed to partner together to start a training and consulting business based on my expertise.

The idea was there is a vast market for Chinese students and professionals seeking a competitive advantage to further their careers at multinational companies and abroad, and who better than me to teach them how to succeed. We would each invest an initial 200,000rmb capital to promote career development training programs that I would develop. 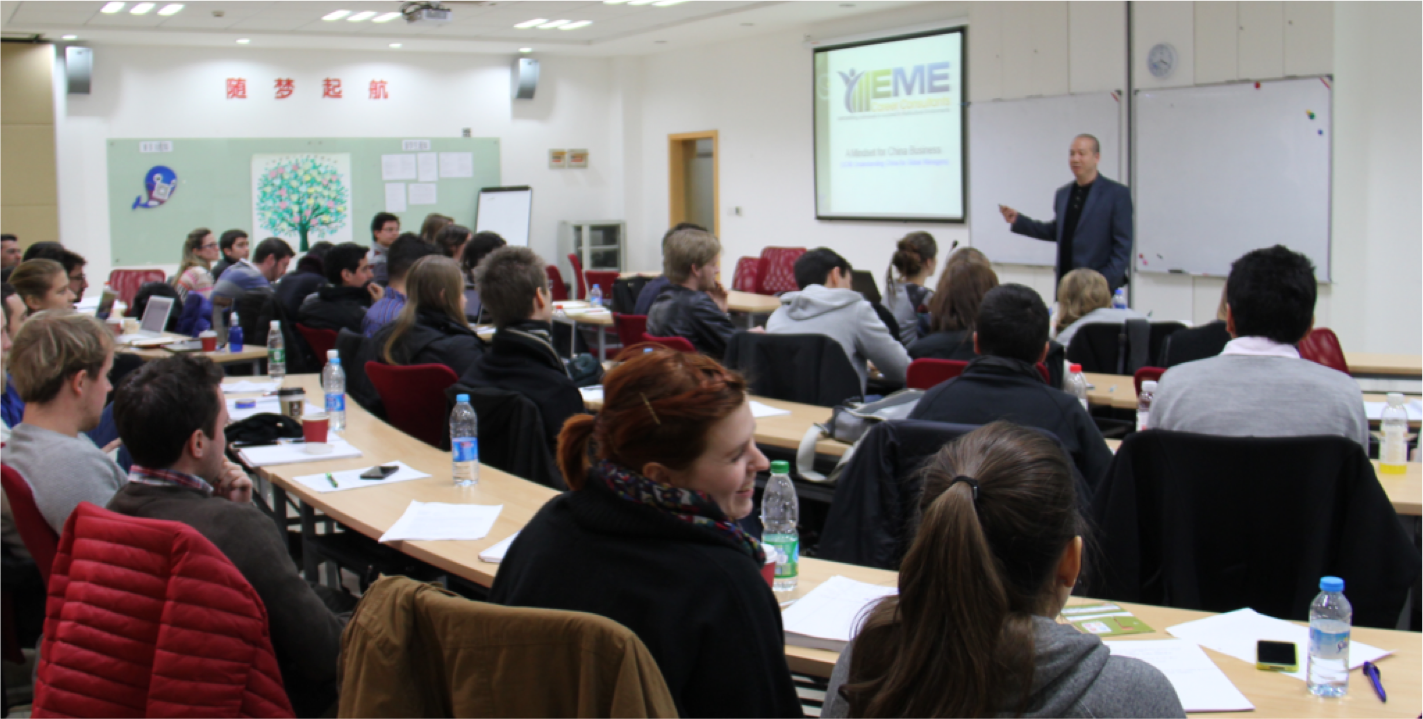 I began teaching International MBA students at Shanghai International Studies University (SISU MBA) and Eastern China University of Science and Technology (ECUST MBA) to build my reputation as an instructor, and I also became a featured China expert for MBA and Executive MBA programs visiting China. 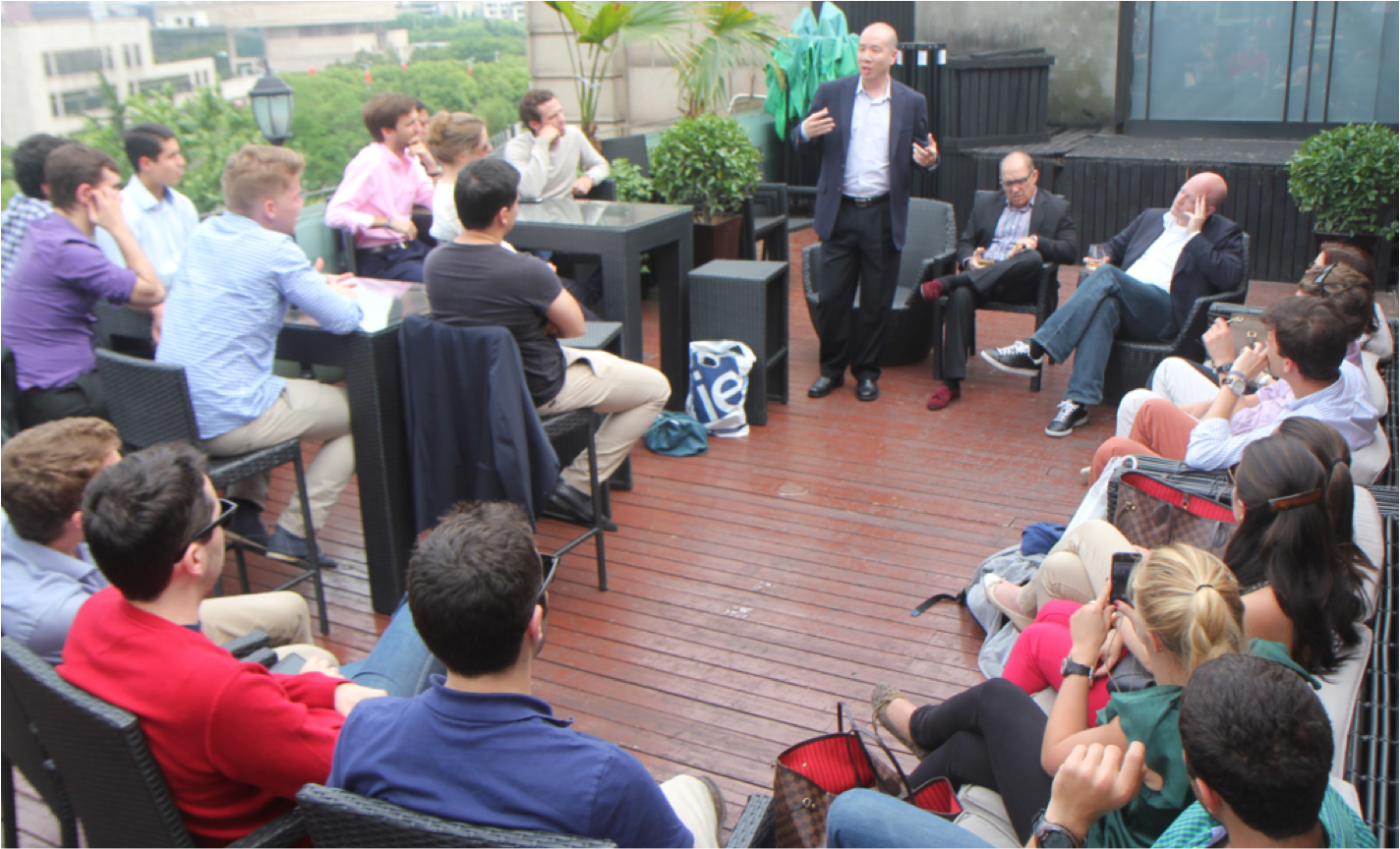 EME’s services and value-promotion were still largely undefined, so we decided to create our own events platform to connect directly with followers, partners, sponsors, and potential clients. What better way to understand the needs of our target audience than to engage with them directly thru events. 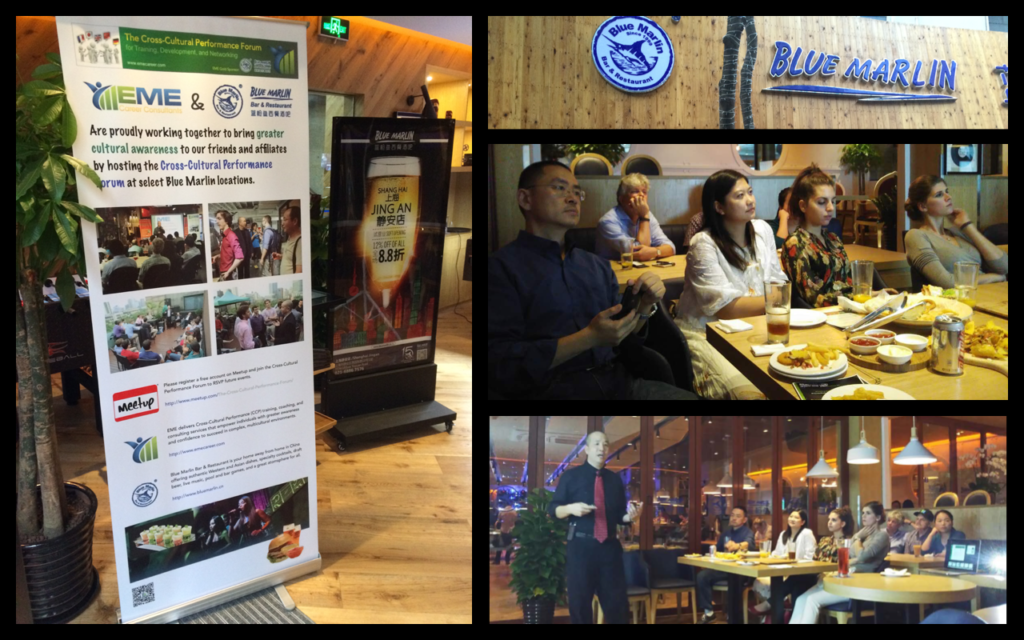 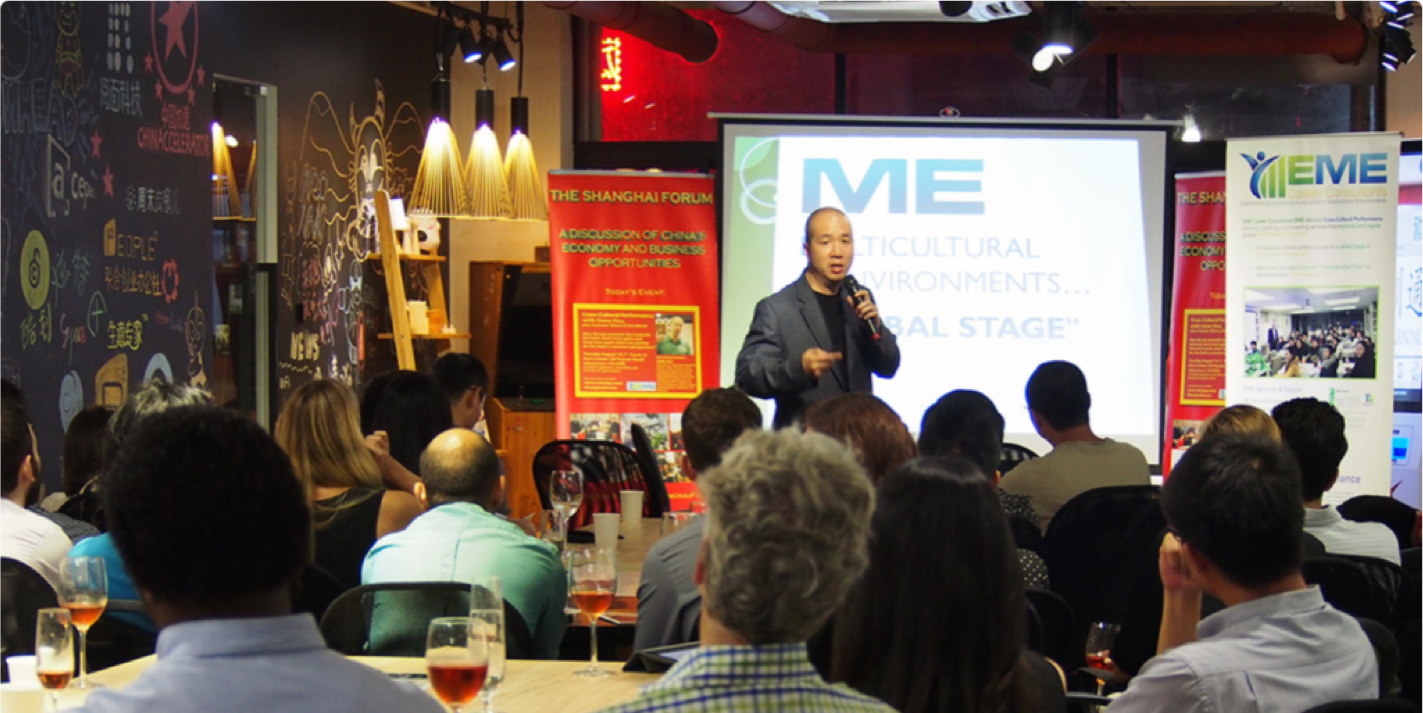 Blue Marlin was EME’s first venue partner, and EME Meetup Events has since hosted over 200+ events, grown organically to over 10,000+ members, and it now provides a platform for multiple event organizers, Meetup groups, venue partners, and sponsors to deliver events to its members. 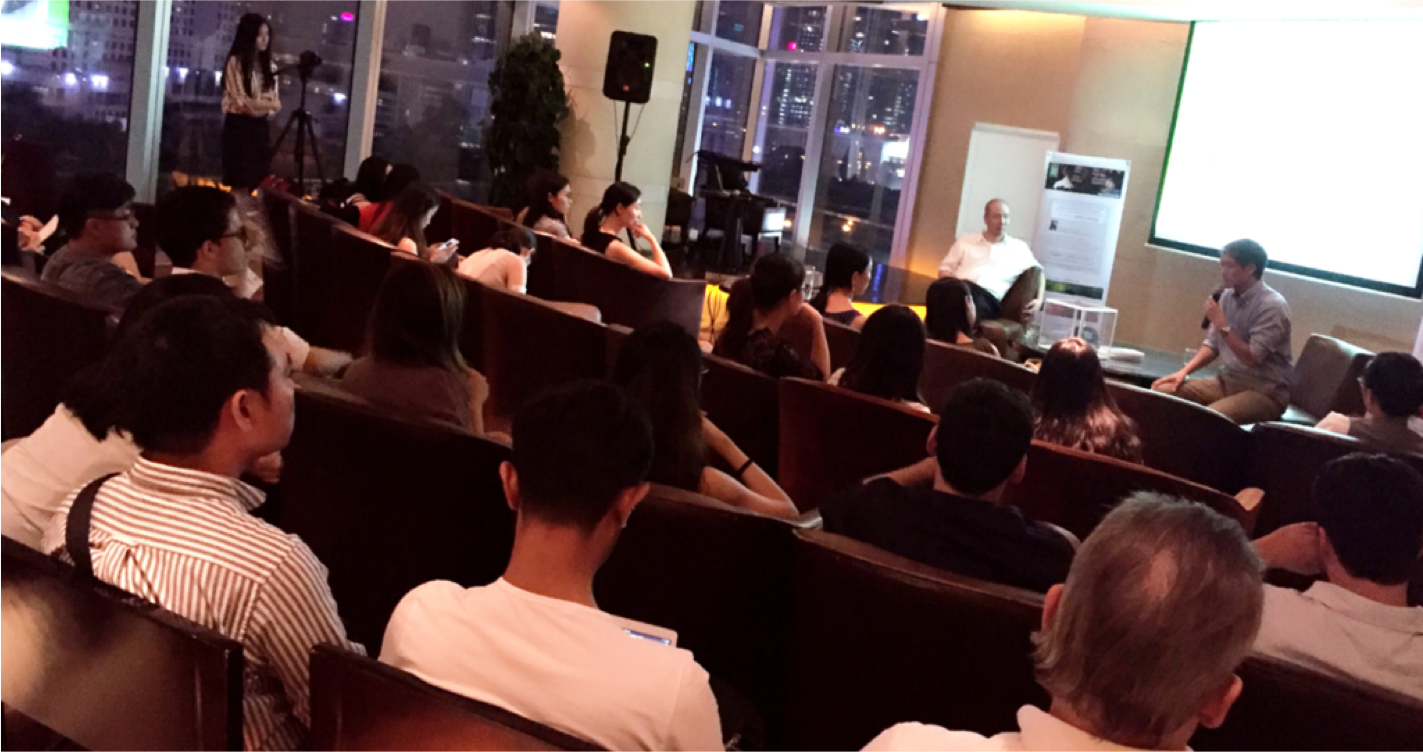 In 2016, Hong Kong University approached me to teach cross-cultural management for Chinese executives enrolled at HKU-IBC (Institute of China Business). I thought I could use this opportunity to learn how institutions teach this subject, but HKU requires its instructors to develop their course materials based on real business experiences because the students are all executive-level Chinese seeking practical business knowledge. 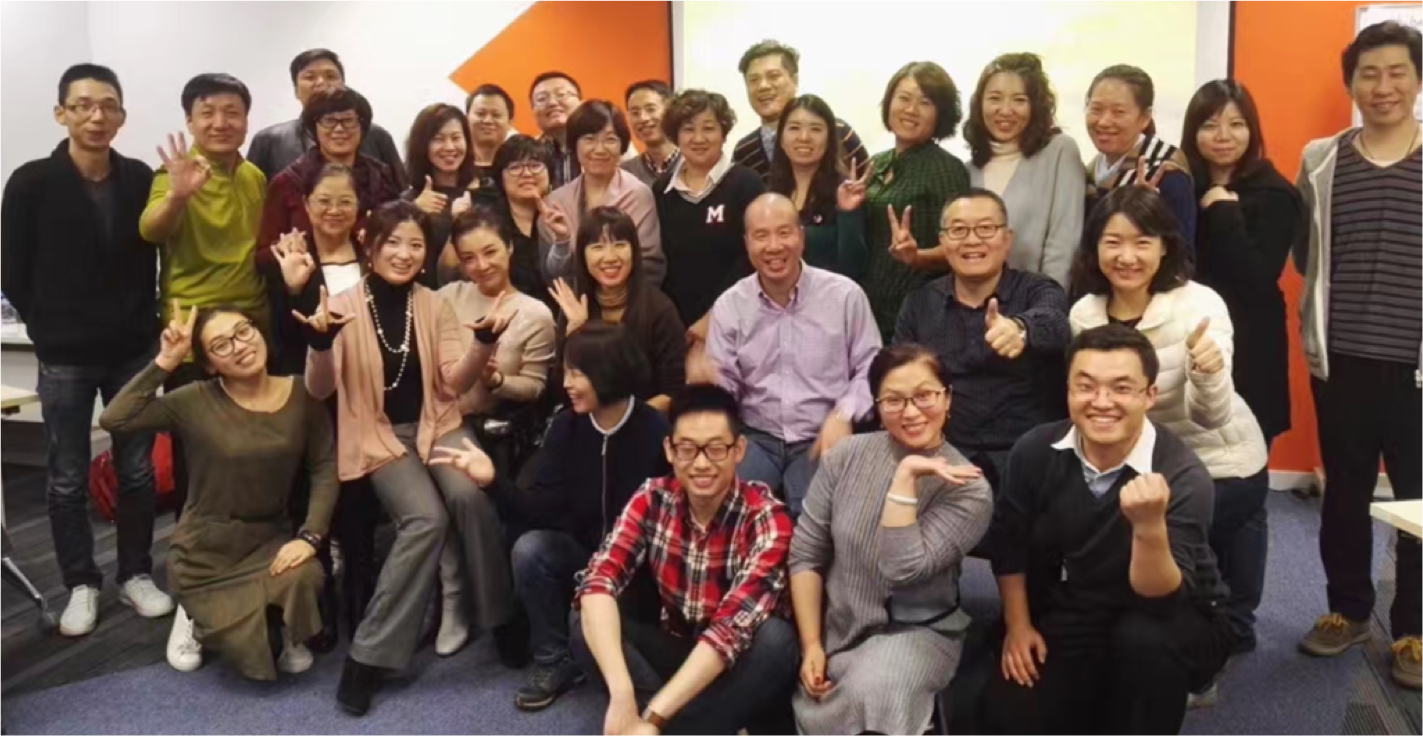 For me and the mission at EME, this was the perfect opportunity for me to engage directly with Chinese business leaders and incorporate my soft skills development concepts into general business training. I taught his 16-hour cross-cultural management course a final two more times in Shenzhen and Shanghai in May 2017 before completing my relocation back to the United States.

EME’s early followers ranged from students seeking to gain a career advantage in multinational companies to Chinese executives discovering how to succeed on a global stage, so “career” was included in the business name.

EME Career Consultants will now be rebranded as EME China Consultants to address the new focus of helping global leaders overcome their China Leadership Dilemmas (CLDs) to achieve better outcomes and discover hidden solutions within themselves to successfully navigate the complexities of doing business in China.